"Priscilla Royal understands the human heart, the medieval mind,
and how to ratchet up the suspense with each turning page."
—Sharon Kay Penman, NYT bestselling author 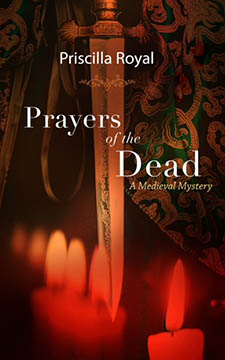 Welcome to thirteenth century England where our assumptions about the medieval world may be shaken and the inhabitants of those distant centuries begin to resemble friends, neighbors, and even family. As a writer of historical mysteries, I want to honor the past by allowing characters to speak and act within the context of their world but without making the mistake that everyone thought and behaved exactly the same. Language and fashion may change, but human nature does not. And keep in mind that what is the past to us was the immediate present to our ancestors, just as today will be history to our descendants.

Prayers of the Dead, the 17th in my series featuring Prioress Eleanor and Brother Thomas of the Order of Fontevraud, is now available!

Prioress Eleanor’s cousin, the Earl of Ness, visits with his wife, Eda. When his unloved spouse is murdered in a priory chapel, and the weapon used is his knife, he becomes the prime suspect. Crowner Ralf claims the investigation under the king’s law. No monastic is suspected, and the involvement of her own cousin certainly disqualifies her. But the prioress insists she take jurisdiction...

With the discovery that Eda was a woman who collected secrets and let them be publicly revealed, the suspect numbers grow. Eleanor feels overwhelmed, but her beloved priory has been defiled by murder and honor demands she rectify it.

"History is the essence of innumerable biographies."
—Thomas Carlyle, "On History," 1838