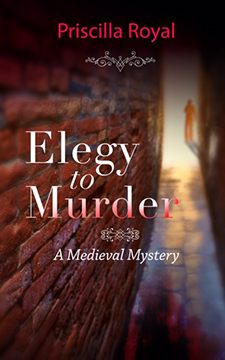 #16 in the Medieval Mystery series

"Priscilla Royal has given us a highly recommended addition to this long-running marvel of a series."
—Judith Starkston, The Historical Novel Society (Editors’ Choice)

The roads near Tyndal Priory are filled with happy pilgrims returning from St. Walstan's feast day.

But all is not joyful. Prioress Eleanor's loved ones are suffering. Signy, the local innkeeper, is quarreling with her suddenly rebellious foster son. Gytha, Crowner Ralf's wife, suffers failing health while her husband hunts smugglers on the distant North Sea coast. Brother Thomas remains moody and aloof. She longs to help them all, but disaster strikes. An itinerate carpenter is badly beaten. A pilgrim is murdered near the priory walls.

Are the two crimes connected? Prioress Eleanor has no right to intervene in crimes outside the Church's authority, but any delay will allow the killer to escape into the crowds of pilgrims. Until the crowner can return, she must act.

Is it too late? Will this be the first murderer she cannot bring to justice?

"Priscilla Royal has given us a highly recommended addition to this long-running marvel of a series."
—Judith Starkston, The Historical Novel Society (Editors’ Choice)

"This well-balanced novel, with its blend of fact, fiction, and thrills, will pique readers' interest in the village and its denizens."
—BookLife Reviews, a subsidiary of Publishers Weekly