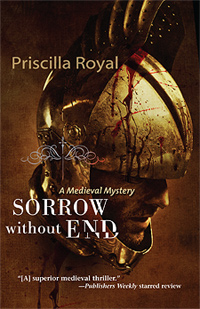 #3 in the Medieval Mystery series

As the autumn storms of 1271 ravage the East Anglian coast, Crowner Ralf finds the corpse of a brutally murdered soldier in the woods near Tyndal Priory. The dagger in the man's chest is engraved with a strange, cursive design, and the body is wrapped in a crusader's cloak. Was this the act of a member of the Assassin sect or was the weapon meant to mislead him from finding the killer? Brother Thomas becomes a suspect in the murder itself, and Ralf must choose between the demands of his brother, the sheriff, and loyalty to a friend. Meanwhile, the murderer watches and waits.

"Suspense builds amid a vivid backdrop of lepers wearing 'clappers,' a madman who chatters warnings, venal relic sellers and the shadowy 'man from Acre,' haunted by guilt for his wife's death at the hands of a sadistic crusader. Eleanor's steadfast faith in a merciful God must contend with the vicious nature of man in a compelling resolution."
—Publishers Weekly starred review