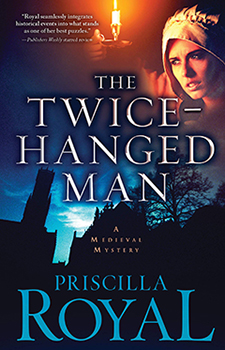 #15 in the Medieval Mystery series

King Edward's war against the Welsh is not progressing as he wished. Crucial battles have been lost. Raids against English communities are common. Prioress Eleanor (with Brother Thomas and Sister Anne) convinces her brother, Robert, to leave Marcher lands for a safer haven, but their journey ends abruptly when his pregnant wife gives birth.

Mother and child are healthy, but amorous Death never wanders far from his beloved Prioress Eleanor. A local abbot begs her help resolving the murder of his priest. He knows the killer's identity, and there was even a reputable witness. The problem is that the crime was committed by ghost, the damned soul of a Welsh brigand recently hanged for the murder of sleeping English soldiers. The abbot has failed to exorcize this malign spirit but believes the saintly Prioress Eleanor and her respected monk can surely do so.

Believing the solution will be easy, Prioress Eleanor agrees.

But the trio of monastics soon discovers that an evil spirit is the least of their worries, and the tale of the hanged man is far from simple. In the midst of war, lies are painted as truths and truths as lies, while individual crimes are easily hidden in the chaos.

"The 15th adventure for Royal's clever, conflicted prioress...continues her mastery of the medieval, provides a mystery that's twisty but not impenetrable..."
—Kirkus Reviews

"Royal seamlessly integrates historical events into what stands as one of her best puzzles, the most Agatha Christie-like in terms of motive."
—Publishers Weekly, starred review